Amefika and Mike’s Wedding: M&M a couple sweeter than candy

Amefika and Mike, or M&M as they are often referred to are definitely sweeter than M&Ms candies. These two people were truly made for one another and everyone of their friends was thanking God for this special day.  Amefika’s bridesmaids did one of the most moving prayers I’ve ever heard as she was getting ready to go to the church for the ceremony. Mike wanted to wait to see Amefika for the first time as she walked down the aisle.  At first he was all smiles, then he adorably bit his lip as tears welled up in his eyes. He was so filled with joy. Later that evening, he gave a speech thanking his guests. Then his attention fell on his beautiful soul mate. He made a tribute to Amefika and how incredibly happy he makes him.  I don’t think there was a dry eye in the house!

Their guests gave M&M a memorable ceremony exit with confetti poppers.  And their bridal party was camera ready with some awesome poses.

I had assistant turned second shooter Nick Zbikowski along with me that day. He did great work and passed his Fucci’s Photos second shooter initiation test with flying colors…dancing with guests at the reception. 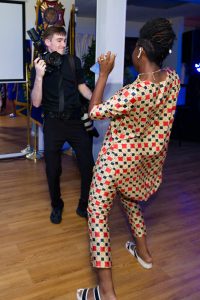 Posted in Boston, Weddings
0 comments
« How to Get the Engagement Photos of Your Dreams
Anna Sui Features Vail Fucci’s Image on Instagram for Anna Sui Vision »